Six weeks of proton - DONE! She handled it like a champ. The staff never thought a 6-year-old would be able to sit perfectly still for twenty minutes at a time for 28 straight days with nobody else in the room. Proved them all wrong. Afterwards, she had the opportunity to ring the completion bell (she got stagefright), a tradition which got it's start at the MD Anderson Cancer Center (http://houston.culturemap.com/news/city-life/06-05-11-16-05-bell-ringing-at-md-anderson/). Now she has two weeks off from chemo.

Isabella has had the last two weeks off from chemotherapy, as scheduled.  Because of this, she has been extremely energetic and has been eating a lot.  She spent the weekend near Pittsburgh at her cousin's wedding - serving as the flower girl.  She spent the entire reception dancing and hula hooping!  She said it was the greatest day of her life.

Today she started her proton therapy.  She was able to stay still during the whole treatment so she didn't need anesthesia.  This will make this next phase so much easier on her.  After today, she will need 27 more treatments - every Monday through Friday - for 5 1/2 weeks.

Isabella has been doing well.  She was very excited to perform in her dance recitals this weekend and did great!  She will be starting her proton therapy on July 7th and it will be every M-F for 28 sessions. (5 1/2 weeks)  During this, she will continue to receive her regular chemo treatments at CHOP.

We are excited to start this next step to eliminate the tumors from her body!

For the past two weeks, Isabella had several imaging tests done.  The results were GREAT! The MRI showed that the primary tumor has shrunk to less than half the original size and the secondary tumor in her femur is so small that they couldn't even get clear imaging.

The PET scan she had yesterday, which shows the presence of active disease, did not light up at all in her femur, and very little in the main tumor area in her buttock.

The doctors will meet with their team next Thursday to discuss the future of her treatment plan.

On top of this, she had a surprisingly good couple of weeks.  She had a few up and down days both weeks, but overall she handled it very well.

Last week was another great week.  She only had one day of treatment and went about her business as usual.  School, dance, playing, and a great party on Saturday that went past the scheduled 7-9PM and ran until 1:00 in the morning and she was still going strong!  This week is a different story.  She had her 8-hour treatment today.  This is the first time she's had to endure thie treatment since the first day of treatment.  She had to come home with an infusion pack that she needs to wear throughout the night.  Tomorrow we willl be removing the pack ourselves (as advised from the home nurse), and of course she's anxious to go to school.   In the afternoon, she will complete this treatment and be de-accessed, and get a shot.  Thursday, she needs to get scans in anticipation of her proton therapy between weeks 13 and 15.

We’d like to thank everyone for their continued support, prayers, donations, and gifts for Isabella.  We have been amazed by all of the love shown towards our little girl.

Isabella has been extremely fortunate to have so many people send things to her to help cheer her up.  We’ve been doing our best to keep things as normal as possible.  The more we maintain this level of ‘normalcy’, the more she acts like her typical self – happy and full of energy.  Right now, she is living a life that is normal to her.

One thing that has been happening on a regular basis, since she was diagnosed, is an influx of gifts.  We GREATLY appreciate everyone thinking of her and wanting to shower her with gifts, and the last thing we want to do is to sound ungrateful.  We are NOT.  However, while we never anticipated this to be an issue,  she is becoming accustomed to receiving them, and opening gifts is no longer special.  We’d hate to have her birthday and Christmas be just another day to her.  We are also realizing what a generous little girl she is.  She recently commented that the children that are at CHOP ‘need them more than I do’.  She started taking some of the gifts she received and asked if she could bring them to those children who aren’t doing as well as she is.  She even asked if we could ask people who want to give gifts to send them to the children at CHOP directly.  We told her we would pass this along since we thought it was a very nice idea.  You could even write ‘#TeamIsabellaOrg’ on the gift.  This is frequently done on gifts to the hospital to show support.

We thank you for your understanding and for your continued support.

We are very happy to report that Isabella had another outstanding week!  She was feeling great every day and had an awesome time visiting American Girl in NYC on Friday with some very good friends.  While she was in NYC, her school was having field day.  Isabella was not able to participate, but the teachers and staff at her school showed their support by wearing her shirts.  A heart felt thank you to each and every one of you for showing your support and for caring so much about her.  We feel very lucky to be a part of such a great school and community with so many great people.

This was a really difficult week for Isabella, having treatments every day.  She had bouts of nausea and vomiting, but still made it to school four days - after each treatment.  She only missed Monday because of a late treatment scheduling.  Today, she made it to the spring fair at the school and had a blast!  Passed out exhausted on the couch watching a movie.

This was Isabella's best week since starting chemo!  She made it to school every day and only missed half a day on Monday for her chemo treatment.  Amazingly, she went from chemo, to school, and then to dance class - which she is thrilled to be back at.  She's a rock star!

Isabella had some stomach issues this week, but luckily they were resolved fairly quickly. Overall, she had a pretty good week and a great weekend filled with fun and good friends!

This week, Isabella’s treatments were every day. The week started off rough, but by mid-week through the end of the week she was feeling much better with great energy. She made it to school 3 days this week before/after her treatments.

She spent last weekend at playdates and a barbecue.  This week she was at school every day (even after her morning chemo on Wednesday).  She has been full of energy and in a fantastic mood all week.  You'd never know she was sick.

During chemo, the doctors are very cautious about any fever over 101.3.  Tonight, we hit just over that, so off to CHOP we go.  With a brief scare that we might have to stay for up to 48 hours while test results came back, a merciful doctor let us go with the promise of continuing antibiotics.  So, we were able to make it home for Easter (albeit at 6AM Easter morning).  So, the kids hunted for Easter eggs at about noon.

Visited the ER due to an Ileus (temporary abscence of the normal contractile movement of the intestinal wall).  Was released the evening of the 10th after it resolved itself.

On April 8th, we found out that the doctors had met again about her case and that they agreed that Isabella would be a candidate for proton therapy around week 13.  This type of radiation therapy minimizes the amount of damage to surrounding tissue.  It is currently only available in 14 places in the United States.  Fortunately, UPenn is one of the locations.

Overall, Isabella has been doing really well.  This past week was really hard for her.  She had a full day treatment on Monday and was unusually sick all day.  We aren't positive of the cause but believe it may have been a stomach bug since all her tests came back perfect.  However, she spiked a fever just as it was ending so she had to be transferred to CHOP in Philly.  She was released the next afternoon and made it to school Wed. and Thurs, but then spent Friday at the clinic because she wasn't feeling well again.  She's off from chemo for the next two weeks and on November 2nd will start her 3rd and final 15 week course of chemo.  Imaging is set up for Oct. 28th.  Please keep her in your prayers.  We are hoping and praying for great results!

Isabella has been doing very well continuing her weekly chemo treatments. She was very excited to start school last week and to see her friends again. Today, she received fantastic news! She was cleared to run and jump, which she has been restricted from doing since the initial diagnosis. This means she can resume gymnastics, which she has really missed.

​We have a very exciting announcement! With the help of Richboro Elementary School, Kays Act 2 Dance Studio for the t-shirt sales, a very generous anonymous donor, and of course the hundreds of you who have donated over the last few years - all of whom we are extremely grateful to - we have raised enough money to open up a fund at CHOP specifically for Rhabdomyosarcoma research!

We have been in touch with representatives at CHOP who have located a physician researcher whose work will benefit from this donation! His nano-medicine research has the direct potential to improve therapies for high risk solid tumors including Rhabdomyosarcoma. Once this fund is fully established anyone will be able to directly donate to it.

So, we ask that you consider that fund if you ever donate to CHOP.

Thank you so much for your continued support and generosity!​

Isabella had a VERY hard week this time with chemo every day. She was very sick and feeling down. When she finally made it to school Thurs afternoon, she was in MUCH better spirits. She made it to her dance rehearsal Thurs night, to school again Friday afternoon after chemo, and then to a Christmas party last night. Right now, she has only 2 treatments left! One on Monday which she tolerates very well, and her LAST one on January 4th which will be an all day treatment that leads into the next day. Her next scans will be scheduled for the end of January so please continue to keep her in your thoughts an prayers. We wish everyone a Merry Christmas and a very happy & healthy New Year! Thank you for supporting us and our little girl through such a tough year. 2016 WILL be better! 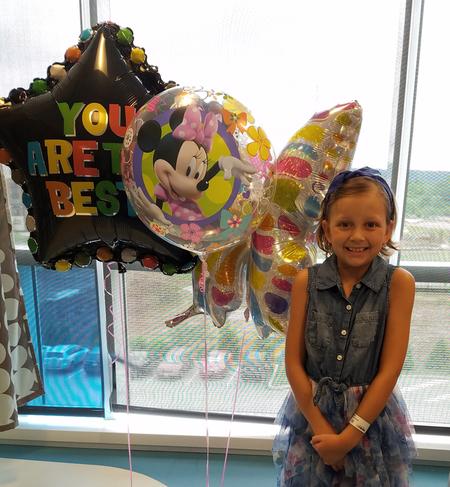